There are dedicated cyclists I know who ride to work, shopping, and fun and then there is this news. Recently a New Zealand Member of Parliament, Julie Anne Genter, got on her bike early in the morning and cycled to the hospital. According to the news accounts Ms. Genter was already in labour and delivered a baby an hour later.

The Green party politician wasn’t planning on this way of arriving to the hospital but that is what happened none-the-less!

New Zealand has a very socially progressive reputation, and in political circles, it can be considered woman-friendly as well. Their Prime Minister Jacinda Ardern was pregnant in office, took a maternity leave and then had her infant accompany her to international meetings to facilitate breastfeeding.

Her bike looks like it’s already prepared to carry both kids and her headlight is impressive as well!

You can read the entire report here:

New Zealand MP Julie Anne Genter got on her bicycle early on Sunday and headed to the hospital.

She was already in labour and she gave birth an hour later.

"Big news!" the Greens politician posted on her Facebook.

"At 3.04am this morning we welcomed the newest member of our family.

"I genuinely wasn't planning to cycle in labour, but it did end up happening.

"My contractions weren't that bad when we left at 2am to go to the hospital — though they were 2-3 minutes apart and picking up in intensity by the time we arrived 10 minutes later," Ms Genter wrote.

Cycling to the maternity ward 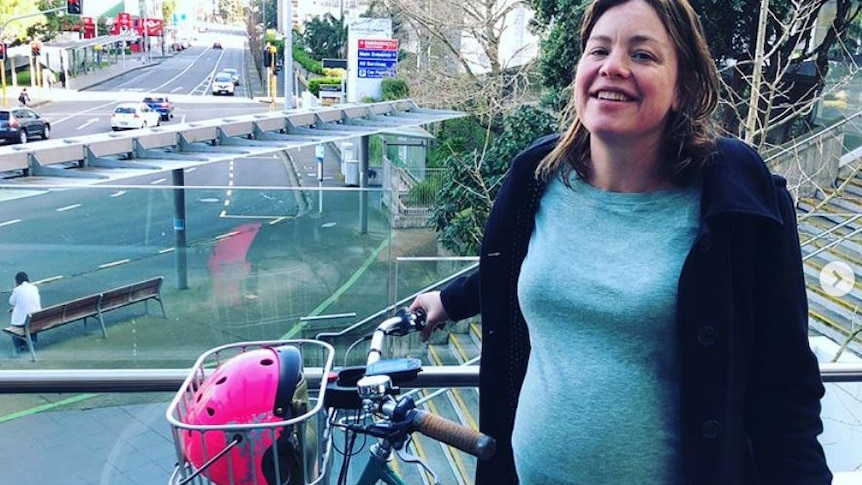 New Zealand's Minister for Women, Julie Anne Genter, reveals she rode her bike to Auckland City Hospital to give birth because there "wasn't enough room in the car".

"Amazingly now we have a healthy, happy little one sleeping, as is her dad," said Ms Genter.

A dual citizen, Ms Genter was born in the US state of Minnesota and before moving to New Zealand in 2006.

Ms Genter — her party's spokesperson for transport issues and whose Facebook profile includes "I love my bicycle" — also biked to the hospital in 2018 for a previous birth.

At the time, she said she rode to Auckland City Hospital to give birth to her son because there "wasn't enough room in the car".

Prime Minister Jacinda Ardern famously took maternity leave while in office and brought her three-month old to a United Nations meeting because she was still breastfeeding.